The Basics of Listening Prayer: How to Hear God’s Voice

I don’t know about you, but for a long time, this verse bothered me. I was supposed to be listening for his voice, but mostly all I heard was silence.

Get a Free eBook: Do you want to grow closer to God in your prayer times? I’ve written a free guide called The Three Day Listening Prayer Devotional and I’d love for you to download it. Click here to download the free devotional.

The silence pointed to a deeper frustration. All my life I had struggled with this problem: I had accepted Jesus as my savior and was supposed to have this personal relationship with him, but it didn’t feel very personal.

How Most of Our Prayer Times Look

As a teenager, my mom would ask me the same question every morning at the breakfast table: “Did you have your devotions?”

She meant, had I read the Bible and prayed?

My devotions were dry, routine affairs. I’d whip through a chapter in the Bible. I’d run down a list of prayer requests, and I’d check that part of my day off the list. What a contrast with, say, a date with my girlfriend. When I took her out for dinner and a movie, sometimes we missed the movies because we couldn’t stop talking. Our conversations had a momentum all their own.

How discouraging that the relationship that was supposed to be the most exciting and wonderful in my life had become a check on my to-do list.

Our Daily Prayers Can Be So Much Deeper

Maybe you are like me—you grew up having monologues with God and have never heard before that he wants to talk to you. You’ve not really learned how to hear his voice.

I remember the first time I heard his voice. It was years later; I was desperate. I had been betrayed by someone very close to me and I needed to know that God cared. I asked him if he would share with me what he thought of me. The next thing that happened changed my life forever. God spoke inwardly to me in a way that might as well have been audible. He said, “Seth, I love you.”

That did it. I was a junky, ruined for anything that smacked of a tame, compromising faith. I shared with my children what they called “praying the new way.” One of them heard God say, “I love you more than the flowers and the trees.”

After that, we all began to grow in our ability to listen. We would ask the Lord questions, then listen, and he often spoke.

In 1998, Allie Pohlmeier traveled with a team from Judson College to do a project in Matamoros, Mexico. As so often happens, her heart was touched by what she experienced, particularly by one family for whom her team built a home. They painted it green.

Before leaving, she took a picture of herself with that family in front of the home.

In the spring of 2005, she returned to Matamoros on an AIM project. One day, she asked the Lord what he wanted her to do. Then she waited and listened. Allie felt the Lord saying, “Find the green house.”

“But God,” she said, “Matamoros is a huge place! There may be a million people living here. I have no idea where that house is—how in the world would I ever find it?”

“But God,” she said, “that’s a crazy thing. I don’t even know the name of the neighborhood. I have no idea what the family’s name is. I’ll look stupid!”

Eventually Allie gave in, and taking the picture of the house with her, started off.

She looked up and down the first street—no green house. She felt ridiculous, but knew she must obey. She saw a girl walking down the street, so she approached her.

“Could you look at this picture and tell me who these people are,” she said to the girl, “or where this house might be?”

The girl studied the picture and slowly a look of amazement came to her face.

“That’s me!” she exclaimed, pointing at the picture. “That’s our house! I’ll take you to it. It’s just around the corner.”

As it turned out, she was only a block away from the green house!

What Allie experienced shouldn’t be unusual for those of us who listen for God’s voice. Christianity is a personal faith. God wants to talk to us. He wants to guide us, but we have to listen.

How to Listen to God

How do you listen to an all-powerful but invisible God?

The Bible has a lot to say about it. Over and over God interacts with people in a variety of ways. Our God is endlessly creative in how he communicates with them.

God spoke to Daniel through visions, Balaam through a donkey, Peter through a rooster, and of all things, he spoke to Moses out of a shrub.

He is a God who says, “Listen for my voice.”

There are hundreds and hundreds of examples of God speaking to people in the Bible. It’s his modus operandi—and he gives detailed instructions for this in both the Old and New Testament.

We also have a rich history of God speaking to man from Jesus’ time until the present—people like Augustine, Mother Teresa, Joan of Arc, and Brother Lawrence.

In our relationships, we are so distracted and busy that it’s often the exception rather than the rule that people listen to one another, much less listen to God. We need to learn how to listen.

Listening Prayer Can Transform Your Church

Recently I spoke to a church. They asked me to ask for the church’s missions faith promise offering. I asked, “How did you do last year?” The answer came back, “Not so well, people gave just 46 percent of faith promise monies they had pledged.”

I thought, “That’s interesting. I’ll bet the reason the figure is so low is not that they don’t have the money, but that they didn’t hear the Lord correctly. If they heard him clearly, then the figure would be 100 percent.”

So I did a survey. “How many of you feel as though you hear clearly from the Lord?” The answer came back: 46 percent. The same figure!

I don’t think it’s a coincidence. Frankly, almost everyone struggles to hear God and many people have never heard him.

Learning to hear the Lord’s voice isn’t complicated. But it does require some discipline to find a quiet place and to allow some time just listening.

Perhaps the hardest part of listening prayer is clearing your mind. With all the noise of life regularly cascading through your mind, it can be hard to hear God’s voice. There’s no formula, but let me share a few principles that have worked for me:

Questions To Test What you Hear from God

Can You Really Know the Voice of the Lord?

Vicki Gross was struggling with how to recognize God’s voice, and described a breakthrough that the Lord gave her.

I was on a school bus full of jabbering, yelling kids. My son was in the back of the bus. There were 20 rows of children making noise between us, but as I listened, in the back, I could make out the distinctive voice of my boy. To anybody else who didn’t know him, his voice would have blended into the cacophony, but because I know him, I recognized his voice.

God’s voice is distinctive. He promises that we, his sheep, will hear it. The more you pause and listen for his voice, the more you will find that your ears tune in to it—you become familiar with it. It just requires your listening.

Get the free devotional: Deepen your intimacy with God as you pray through this three-day devotional on Listening Prayer. Click here to download the devotional.

This post is by Seth Barnes. Seth is the author of The Art of Listening Prayer, a month-long devotional that will help you hear the voice of the Lord more clearly and apply his direction to your life. You can click here to purchase the devotional. 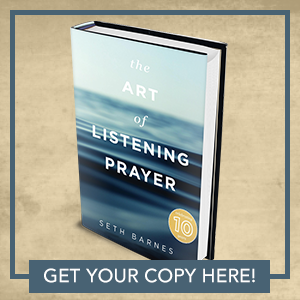 What People Are Saying

"If you are willing to take this book seriously and put in the time, this book will change your life." —Doug

"This is NOT another book on prayer. It's more like sitting down with a wise, experienced, yet humble man, who shares how he has cultivated conversational intimacy with the FATHER." —Michael

"This book has an advantage over many other books on prayer: it forces you (or at least, it forced me) to stop and actually pray." —Amazon reviewer

"This book changed the way I view prayer." —Hugh

"A MUST READ for every believer." —Sammye